British taste for curry has changed, but appetite remains strong

London, United Kingdom – Indian food has long been a staple in the United Kingdom: The rich onion-based gravy of vindaloo, bhuna, tikka masala or madras are a familiar, comforting taste. And it is a serious business.

Curry houses employ 100,000 people and have annual sales of 4.2 billion pounds ($5.17bn), according to data compiled last year by Lord Karan Bilimoria, the chairman of Cobra Beer and member of a parliamentary committee which looks at the curry industry.

But times are changing, and many businesses are struggling.

“The price of raw materials is increasing day by day, customers are declining because of the pricing, because of strict immigration rules we’re having problems with staff, and the younger generation here does not want to step forward and take over family businesses,” said Saidur Rahman Bipul, chief treasurer of the Bangladeshi Caterers Association (BDA), the largest trade group for Britain’s curry houses.

Oli Khan, senior vice president of the BCA and proprietor of three Indian restaurants – two in Stevenage and one in Luton – told Al Jazeera he has “never seen a crisis like this before”.

“Curry houses have been in Britain for over 200 years, and I’ve been living here for 32 years,” he said.

But every week, several Indian restaurants around the UK close down; he himself has sold some of his restaurants, unable to sustain them due to difficulties bringing staff from South Asia.

The way of cooking here is different. You can’t find this curry in Bangladesh or India. Curry is part of British heritage.

High-end restaurants such as the Cinnamon Club in London offer Tamil, Rajasthani or Delhi-style haute cuisine.

Mowgli, a small national chain of restaurants launched in 2014, is one of a number of more affordable options. Its website makes the contrast with traditional curry house food explicit, saying their dishes are “a million miles away from the curry stereotype” and “convey the truth that real Indian food is extremely healthy, often vegan and always packed with fresh flavour.”

Although the word “curry” is instantly recognisable in the UK, covering everything from lamb dhansak to chicken bhuna, it is not a word you ever hear in India.

Scholars debate the etymology of the term, but it is broadly accepted that it was first used by the Portuguese and then the British during the colonisation of India.

“It is a word used by Europeans to describe what Indians eat – a shorthand term to describe stew or broth that you pour on rice,” said Lizzie Collingham, author of Curry: A Biography.

The Anglicised version of Indian food so beloved in the UK began with Indian cooks adapting dishes during the British Raj.

“The British developed a spice palate which is different – onions, ginger, lots of turmeric as they like the yellow colour,” said Collingham. “The dishes change to suit them, then those dishes get brought back here. It evolves and becomes distinctively British rather than something you’d have in India.” 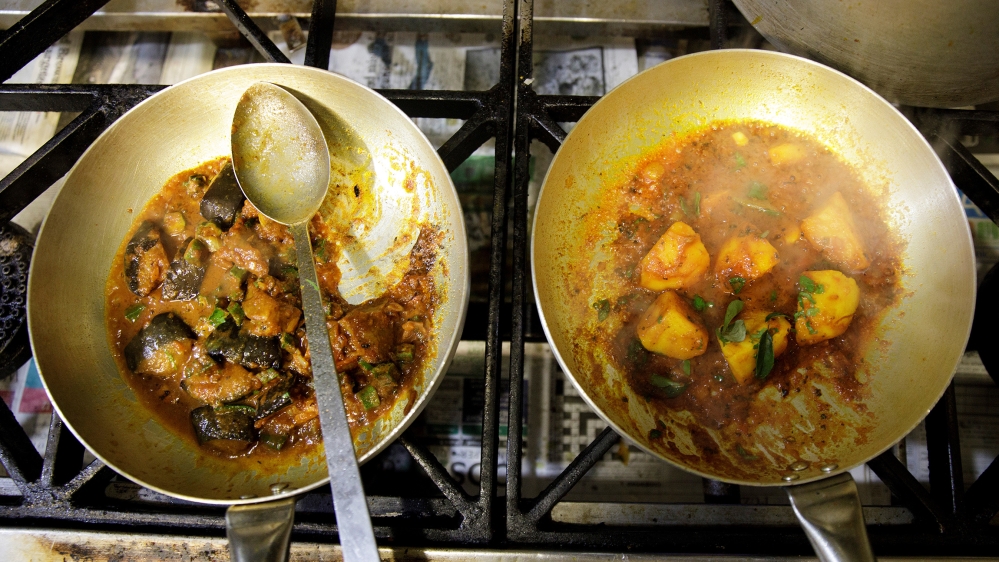 Vegan meals are cooked in the kitchen of the City Spice curry house restaurant on Brick Lane in London, Britain January 7, 2019 [Simon Dawson/Reuters]

The British curry developed further in the 1960s, when migration to the UK from South Asia drastically increased and hundreds of restaurants were established around the country, primarily by Bangladeshis from the Sylhet region.

They served up a dizzying array of cheap meals, mostly constructed from a base sauce of onion, ginger and garlic, with different spices added to create different colours and flavours.

It was in this era – in 1958 – that Bipul’s father set up his first restaurant, Great India, in London’s Chelsea.

For decades, Indian or Chinese food were the go-to affordable meals out in Britain, but today there are many other contenders: Chain restaurants such as Pizza Express or Ask offer cheap options, while other international cuisines such as Thai or Japanese food have also become widely available.

Bipul notes, with sadness, that the younger generation is not interested in taking over family businesses in the way that he took over his own father’s restaurant.

But simultaneously, some second- and third-generation British Asians have sought to market a different kind of food, something more akin to what they eat at home.

British Indian chef Meera Sodha is the author of two popular cookery books, Made in India and Fresh India. In interviews, she has described going out for a curry with friends: “I was horrified when the food came out in various shades of red and brown and they thought this was what I had grown up eating.”

London’s Dishoom, based on Bombay’s old Irani cafes, regularly has snaking queues outside.

The chain was started by Shamil and Kavi Thakrar, second-generation Indians whose family own the Tilda rice company.

The restaurant has a definite, stylish aesthetic, and offers modern twists on Indian street food dishes. Like Mowgli, which has branches in Liverpool, Manchester and Oxford and was also launched by a British Indian, Nisha Katona, Dishoom appeals to a younger, more urbane demographic.

“Since the 1990s, you have an increasing, gastronomic snobbery developing among the middle classes in the UK, and more interest in food,” said Collingham. 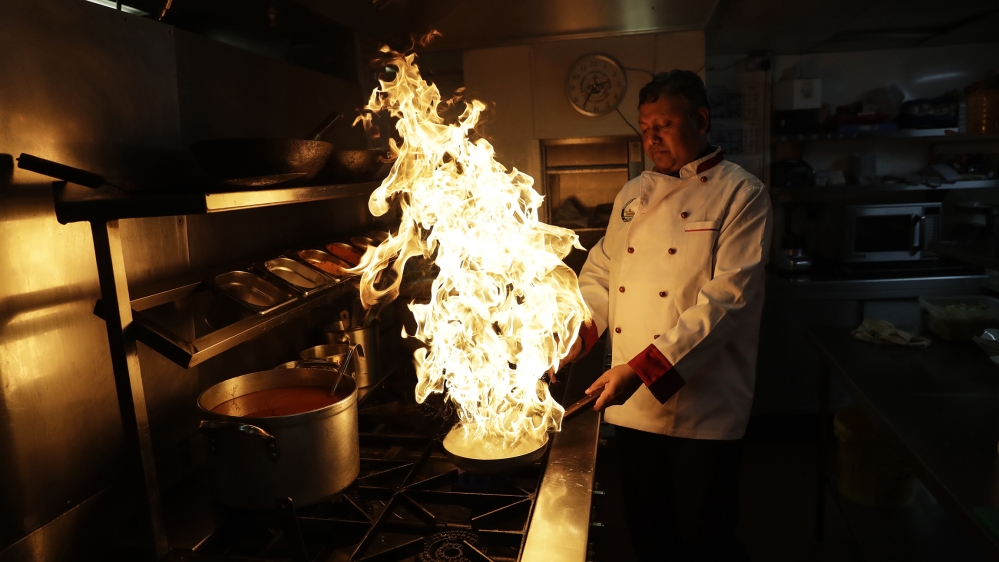 Chef Mohammed- Faizul Haque uses lemon juice to make flames as he demonstrates how to give a smokey flavour to dishes such as Kuchi Chilli Chicken at the Taste of India curry restaurant in London, Thursday, March 9, 2017 [Matt Dunham/The Associated Press]

This broader trend coincided with high-end Indian restaurants being established in the UK.

“These tended to be set up by educated Indians, people who thought, ‘I wouldn’t eat that, why can’t we serve proper Indian food, and show people how amazing and sophisticated our cuisine is?’ These two things came together – a middle-class demand for higher quality, fresher food, and people willing to give it to them.”

In his work at a restaurateur, Bipul has certainly noticed changing tastes from customers.

“Everything is changing,” he said. “These days people are very conscious about healthy eating, so we accommodate that.”

Most Indian restaurants now have a grill and tandoor oven to provide a low-fat option to increasingly health-conscious customers, and have broadly reduced their use of ghee and oil, he explained.

But it can still be hard to shake off the image that the traditional curry is heavy. Between this image problem and ongoing problems with staffing and costs, the future is uncertain.

Khan is optimistic. “The contemporary way people are doing it, with street food and so on, is fantastic,” he said. “But the way of cooking here is different. You can’t find this curry in Bangladesh or India. Curry is part of British heritage.” Indian restaurants: Where it all started and where it’s all going

Indian restaurants: Where it all started and where it's all going 12 July 2007 by Tom Vaughan... read more The distinct flavours and aromas of our dishes are enhanced through the use of traditional  ingredients that have had... read more Why women are the future of Bangladeshi food